((I totally didn't realize this cover pic MOVES until I was setting up my post. LOVELY EFFECT!))

Format: ARC Kindle ebook. Free from author in exchange for an honest review. Amazon link. The website with more detail is www.UrbanEpics.com/shearwater

Did it feel like a full novel: No, but is just a part of the full novel after all. Very in depth though (no pun intended) for just a first parter.

Cliffhanger: The end was set up as a "dun dun DUN" part, but not one of those shocking, unexpected, and annoying kinds.

Official Blurb: "I watched the colored lights and sparkles coming off of Sebastian in the dark water, as the ocean began the process of rebuilding his tail. I longed to join him in the water, to wrap my arms around him and let him carry me under the sea; but I wasn’t ready. For him, the ocean was a home; for me it was death. Without being able to transform, the ocean depths would suffocate me, the pressure collapse my bones and flesh."

After her parent's accident, Clara is shipped off to live with a grandfather she never knew, in a town she can't pronounce. In Ireland, she soon discovers that her mother's secret past is filled with tragedy. Trying to track down the truth, she begins going through changes of her own, until she's not sure just who - or what - she is anymore.

Then she meets the mysterious Sebastian, who won't leave her alone, and Ethan, who apparently can't stand to be near her. Both of them seem to have supernatural powers, and she's not quite sure whether they want to kill her or kiss her. Just when things are getting interesting, someone attacks her, and she gets a revelation that destroys everything she thought she knew about the world, humanity, and herself.

>>>Explore the magical coast of Northern Ireland, and an new interpretation of the Tuatha de Danann, the Fomorians, and mermaid mythology.

>>>An innovative paranormal romance with a brand new magical system, and a version of mermaid biology that actually makes sense.

Full Review: I wanted to read this novel for several reasons. Some are silly, such as the author's last name being my pseudonym's as well ;) And the FMC's last name being the same as a good friend of mine, and their first names are also similar. I took this all as a sign to read the synopsis and then I knew I just had to get my mitts on the book! Very glad I did too, heh.

Clara is a great lead, being strong enough that even when she has her teenage moments, she realizes she is having them. And she has some great face palming moments that just killed me! There was really only one thing she did (or didn't do) near the beginning that felt pretty dumb and railroaded, but we all make mistakes, so I can't really judge her too harshly. Her interactions with her friends and other characters were very individually based and realistic. I really liked how she dealt with Sebastian (and how he acted around her), though her minimal interaction with Ethan was interesting too. Their use of Facebook, Instagram, Harry Potter references, etc, all felt very authentic, not just tossed in to be "hip" like some people do.

I hate reading just parts of books like serials, but this one hooked me within a chapter or two pretty well and I couldn't stay away. I enjoyed Mr. Murphy's writing, it being fast paced enough to develop the story but not so much to overly rush everything. I don't think I can take waiting until October for the very end, aaaaah!

Another thing I liked was the way he writes his mermaids/men. Interestingly possible yet still within a magical world. Ooo, and the accurate locations were also cool! I would have liked to visit Ireland if I ever go to Europe, but now I think it kinda got pushed up the more top locations ;)

As to what I didn't like, well, besides Clara's mistake of keeping something a secret (I don't think it actually did much harm, but it COULD have), was the part where... ack, I don't want to ruin something, but I want to mention it. Well, she kinda gets her YA-style 'specialness' in a way that you no longer really feel like you could just be in her place, which is something I kind of like about YA novels. But it's not all that bad as it develops, and you appreciate and still find Clara enjoyable as a heroine. At least I did. Also, I don't know if I'll be able to deal with this becoming a love triangle later, but that's really just an assumption I have. Maybe it won't even occur that way.

I have posted this review before my usual schedule because I wanted you all to know about it prior to its launch on January 26th. ... ... .... ALTHOUGH.... Mr. Murphy will be selling this first part for only 99 cents starting then, yet on January 28th it will be available for free! Fantastic, right? Well it gets better!

Check this out, straight from the author:

I’m wrapping up Part One of my first novel Shearwater – an epic YA mermaid romance – and I want to do something fun and meaningful for my book launch: raise money for ocean conservancy and to protect marine wildlife.
During launch week, not only will all earnings be donated, but I’ll further donate $1 for every sale. My goal is to sell 1000 copies at 99cents each, which which will raise about $700 + a $1000 bonus. 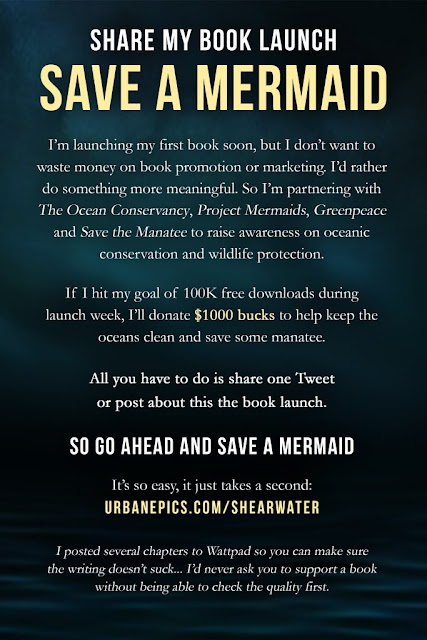 That is pretty awesome, right? Being it was a fun novel, I really do suggest you try it out, whether when it launches originally, or when it's free. Very nice read (and for a good cause!) starting off 2016 in a delightful manner!

Email ThisBlogThis!Share to TwitterShare to FacebookShare to Pinterest
Labels: 4 and above, merpeople, ya