A possible hiatus (that I don't want to take)

So as you may have noticed, I did not post a review last Wednesday, or the one just past. Honestly, I have no finished books of which to write about :[ And weirdly enough, I haven't felt very much like reading either! Kinda crappy, but I hope it's just temporary. I think I'm more than a little tempted to start reading 2-3 new books, maybe I'm just trying to avoid the ones I've already started or something. After all, I could always go back to them, right?

Do you all ever feel like you don't want to read for longer than a few days? How do you snap yourselves out of it?

So I'm not saying goodbye; hopefully I can continue my posts come next Wednesday! But if not, then I'll post out another note about it. Fingers crossed though, heh. 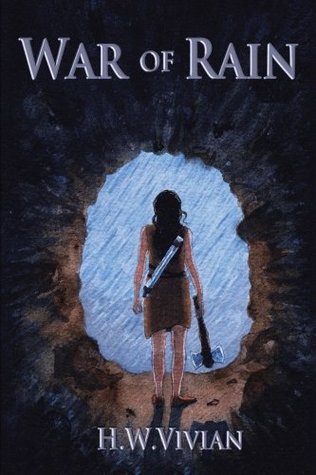 Author: H.W. Vivian - http://www.facebook.com/hwvivian7
Format: Kindle ebook. I was gifted this ebook in exchange for my honest review. Amazon link here.
Did it feel like a full novel: yes
Cliffhanger: no
Genre: post-apocalyptic, young adult
Dates Read: Nov 23, 2015 to Jan 21, 2016
Official Blurb: Fifteen year-old Miri lives in a desert village called Boreala, which competes with the city of Stratos for Rain - the equivalent of Holy Water. During a confrontation while gathering Rain, Miri accidentally kills a citizen of Stratos, and unintentionally starts a heinous war. Now it is up to her to find the God of Rain, Kalono, and ask Him for an invention that can bring both peace and war before Boreala is destroyed.

One Sentence: First part of the the book was spectacular, the second not as much, but still necessary for part three to rock!

Full Review: Opinions in this review are my own.

The very beginning of this was a little confusing. Being dropped among these almost primitive sounding people, with a ruined landscape in the background, was confusing. There was actually a trend of many curious things that were described but you just had a hard time picturing in your mind clearly. Not so many as to ruin the novel, but it sometimes made you want to shake the narrator in want of a better descritption.

That was the main drawback though. Miri was a fascinating heroine overall. She was tougher than she gave herself credit for, which was exemplified more than once. While she did have moments where you kinda want her to not act so young, it’s understandable considering she’s 15. And she does mature a bit, so that’s quite welcome. The rest of the story-line was enjoyable, though I was kind of losing my patience with the second part, just because you are left with a sort of a cliffhanger and you’re concerned about the other characters (well mostly Philip for me). But it is needed to help Miri learn about herself and so the reader gets a bit more information on the current world (which wasn’t what I expected but was pretty cool; I would hope the author might do another novel with those situations perhaps!). A lot of the characters don’t feel all that fleshed out, which was a shame since I think I could have grown to like them had they not been so simple.

There wasn’t very much similarity between this book and Lumiere (maybe like a fraction when it comes to the postapocalyptic world?), unless you consider the way the two MMCs are in comparison to the FMCs. The ladies do their thing and have some interest with their guys. But the guys seem a bit more taken (almost like Peeta with Katniss in the beginning of Hunger Games, though not as devotedly for Philip and Miri) with their romantic interests than vice versa. They are not subservient, nor submissive, but they touch a tone I don’t see often in non-young adult romances. Like they don’t need to bluster and bluff and peacock about, but just follow the lady’s lead without overdoing it?  I’m not sure how to put it in words, but it strikes a deep chord inside me so that I cherish those parts with Philip in them, short as they may feel in comparison the entire story.

So anyway, I did enjoy most of the book. But there were those bits that almost bored me, or I couldn’t understand because I didn’t get the description. Currently there’s a giveaway on Goodreads for a physical copy of the book which I certainly DO suggest you try! I had my reservations, but there’s a lot of deep stuff in here that I think would make this a 4 or 5 for others!