BOOK REVIEW - The Game and the Governess 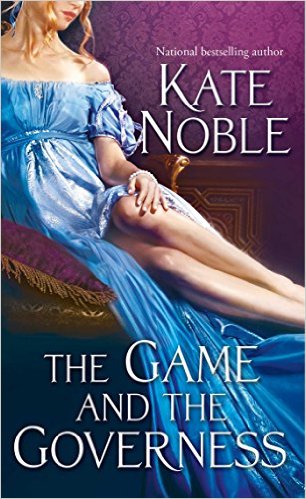 Official Blurb: Three friends. One Wager. Winner takes all.
The Earl—‘Lucky Ned’ Ashby. Pompous, preening, certain that he is beloved by everyone.The Miller—John Turner. Proud, forced to work as the Earl’s secretary, their relationship growing ever more strained. The Doctor—Rhys Gray. Practical, peace-loving, but caught in the middle of two warring friends.Their wager is simple: By trading places with John Turner and convincing someone to fall in love with him, Ned plans to prove it’s him the world adores, not his money. Turner plans to prove him wrong.But no one planned on Phoebe Baker, the unassuming governess who would fall into their trap, and turn everything on its head…

One Sentence: Enjoyable romance though it does take a while to get romantic.
Full Review: So-called "Lucky Ned" is not a very enjoyable hero at first. Phoebe Baker, the governess whom is the planned 'conquest' is fascinating at least, but the story is mostly carried by Ned. Which is something I rarely see, so it's a shame he's not more likable. However, after a point your pity at his constant faux pas and misfortunes kinda turns a bit into like, and you hope things will work out... though by then you want him to drop the pretense because you KNOW it's gonna bite him in the butt.
With the exception of his dry manservant, I couldn't really find myself liking any other character. Turner was close, but just couldn't reach it. Everyone else is either annoying, or hateful and fake, so they're not very fun. The kids were cute, but too young for me to really get vested in them.
I really don't care for romances which hold onto miscommunication as drama, it bothers me. But since the whole basis of this book is that it's a wager on traded places, you kind of can't be honest from the get go. Regardless though, I really enjoyed a lot of the storyline, just watching Ned and Phoebe gradually fall in love was actually quite sweet. The suspense of knowing it was gonna get ugly eventually but in a way I dreaded made me anxious, so it was certainly a page-turner. I would like to check out another book by this author, but I don't think I'll go for the second in this series though.
Rating: 4 stars