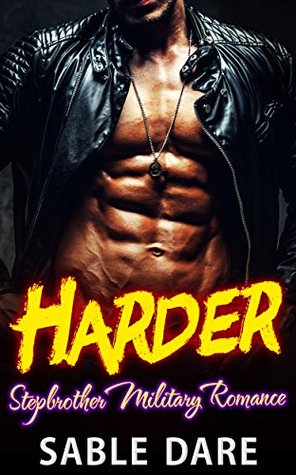 Author: Sable Dare
Format: Kindle ebook, received copy from author for an honest review. Amazon link.
Did it feel like a full novel: yes
Cliffhanger: no
Genre: romance
Dates Read: Mar 22 - Apr 5, 2016
Official Blurb: Nothing can get under his skin. Except for me.
Jackson Cooper used to be a tough kid. Now he's a hard man - gorgeous, sculpted by his Army service and hungry for me. He's also my fucking stepbrother. And I can't keep my hands off of him. He's everything I ever wanted. And everything I can never have. Not only am I engaged to marry the biggest prick in the world, the guy has me in a stranglehold. Not even Jackson's iron fists can solve this little fucking problem I created for myself. There's no running from the thugs who own this boondocks town. But it's my fuck-up, so I'll deal with it, right? Wrong. My captor doesn't just want my hand, he wants everything. And I'm going to have to give it all up. Including Jackson. Why did he have to come back? It would have been so much easier without him here. Now things are fucked up as hell. And I can't help but want them to be even harder.

One Sentence: I expected more, but there's a lot of solid story here though at times you can't fully sympathize with the heroine

Full Review: OK, well first off, the main reason I would gravitate towards something that's titled "stepbrother romance" is because I'm in the mood for a little forbidden fruit. When you find out these two will be related as step-siblings at this point as adults, not previously at all, it kinda deflates that aspect.
So then it feels just like a romance where the heroine has to hide her true feelings because she's being coerced into a different relationship. Which, as it is, is a solidly written book in that manner. Jackson was really enjoyable, being a tough guy with deep passions. You really get into his head with Dare's writing, and you like him for it. Jessica kind of wandered back and forth between like and dislike, but mainly it was because I felt she needed to fess up to SOMEBODY about what was going on rather than keep it hidden for so long AND yet being pissed at others for not giving her a break at the same time.  And then at the end when she really feels she needs help, guess what, it's almost too late.
As a romance, you generally know where it's going to go as the situation opens up, but I felt that the little details were original enough to really hook me in. The writing is overall pretty good, it's just the beginning where you can get a little lost for a lack of a few information-giving sentences. But otherwise, the voices of Jackson and Jessica are decently distinct, and you do get a feel for who they are pretty early on.
Rating: 3 stars